Why should you test your dog for Heartworm?

We strongly recommend that dogs are tested for heartworm disease and other tick-borne infections/diseases yearly. Heartworms in dogs are easy to
prevent, but difficult and costly to cure.
​Only one bite by an infected mosquito will

give your dog the heartworm disease.
There’s no other way dogs get heartworms.
And there’s no way to tell if a mosquito is
infected. That’s why prevention is so
important.

Heartworm disease has been reported in
all 50 states. if you have mosquitoes and
you have animals, you’re going to have
​heartworms. It’s just that simple.

It takes about seven months, once a dog is bitten by an infected mosquito, for the larvae to mature into adult heartworms. They then lodge in the heart, lungs, and surrounding blood vessels and begin reproducing. Adult worms can grow up to 12 inches in length, can live 5-7 years, and a dog can have as many as 250 worms in its system.

Ticks are expanding their range and because of this we are seeing an increase in Lyme disease in dogs, and other tick-borne diseases. It is as simple as a test and 2 boosters to prevent this disease.

Five most common ticks in Michigan

American dog tick (Dermacentor variabilis) These ticks are widespread throughout Michigan forests and grassy areas. They are active from early May-November, and will bite both humans and companion animals.
​Diseases: Diseases associated with the American dog tick are rare in Michigan, but may include Rocky Mountain spotted fever and tularemia. 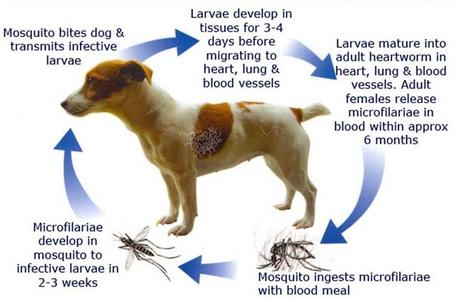 Why does my indoor cat need vaccines?

We hear it all the time, "My cat stays indoors, why does she need vaccinations?"